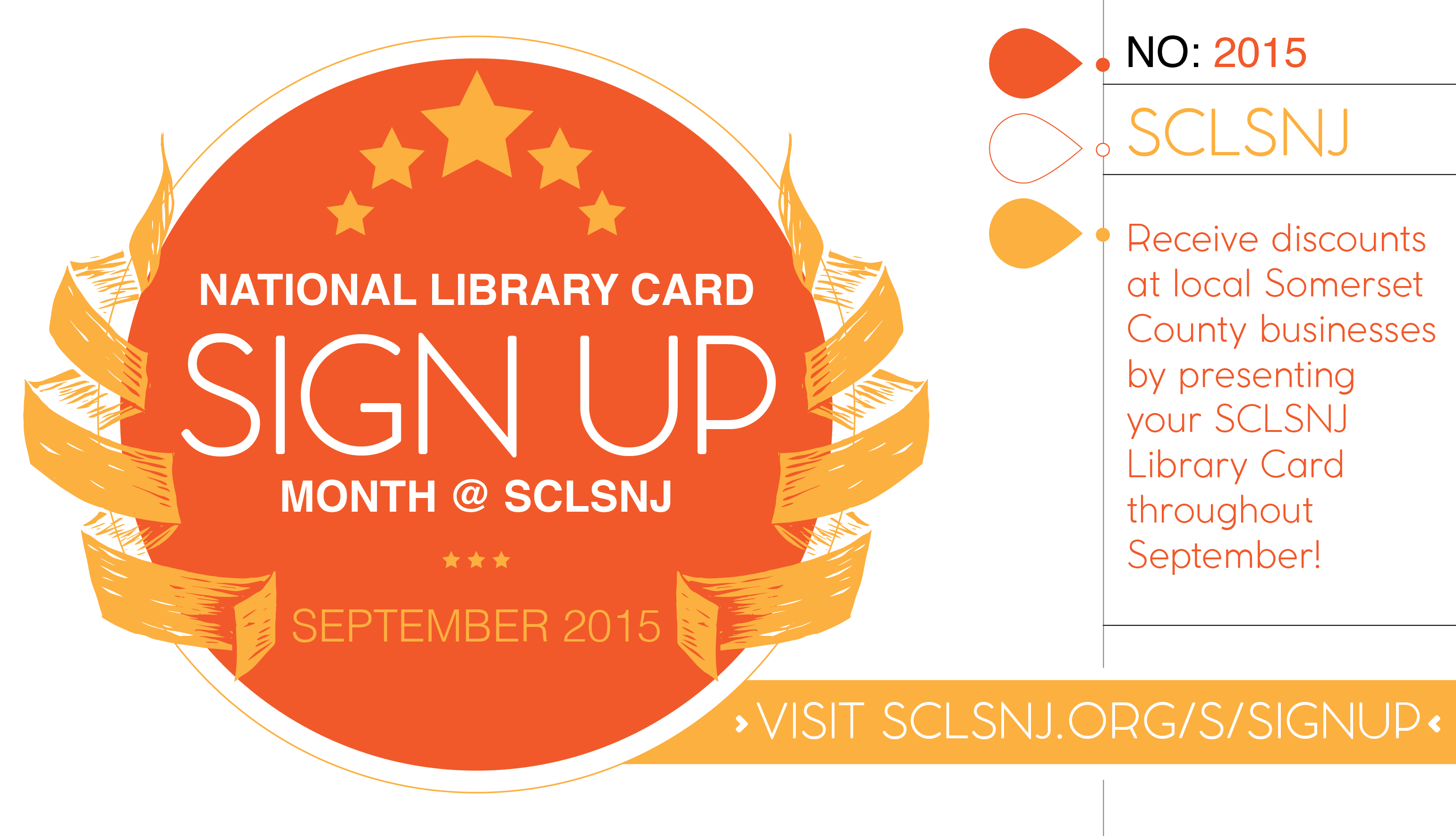 In September 2015, Somerset County Library System of New Jersey partnered with 68 County businesses for Library Card Sign Up Month. The businesses agreed to offer an exclusive discount of 10% off (some restrictions applied) during the month of September when patrons showed their SCLSNJ library card at the time of purchase. SCLSNJ featured the 68 businesses on direct mailers that went to 14,027 homes (details on this part of the campaign are below), on posters, on a special webpage on the SCLSNJ website, in press outreach, in e-newsletters sent to nearly 14,000 patrons, and on printed collateral. Additional outreach that drove patrons and potential patrons to find more information on the webpage included: digital screen images, social media outreach, door to door visits, and outreach in the supporting businesses. 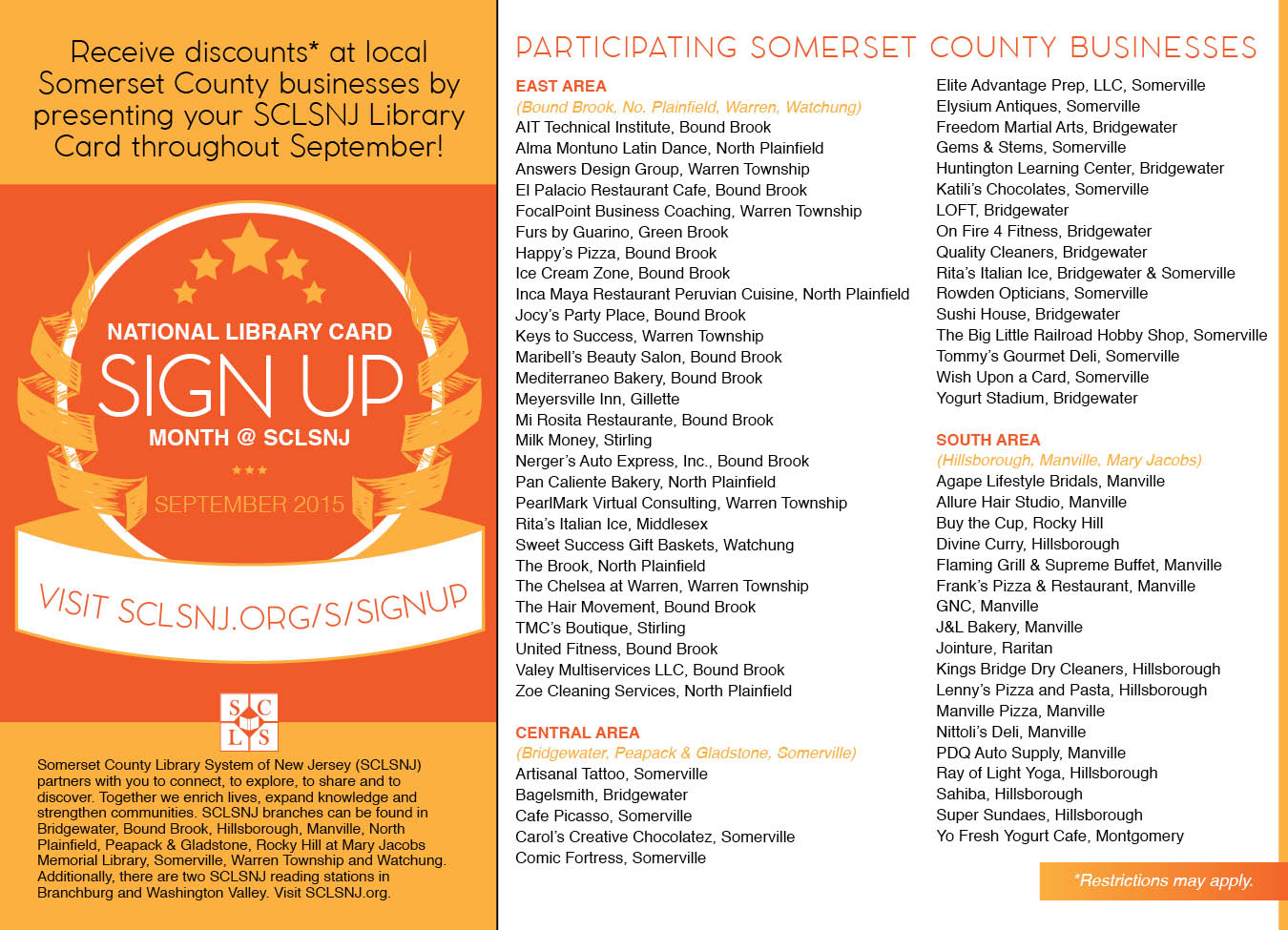 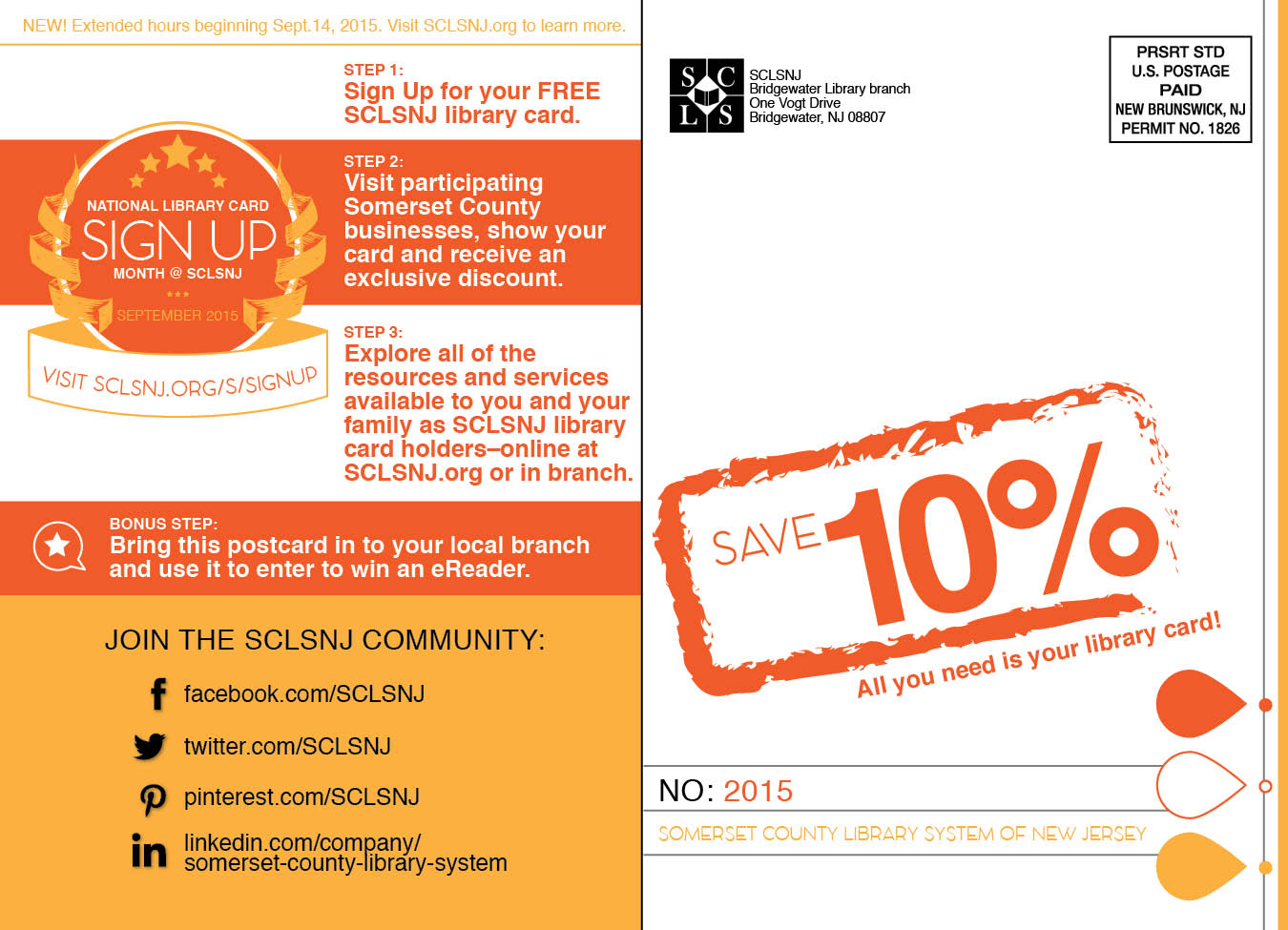 Posters, flyers, participant signage, digital screen images, and other supporting collateral pieces were created both in English and in Spanish to encourage reach and impact in as much of the community as possible. 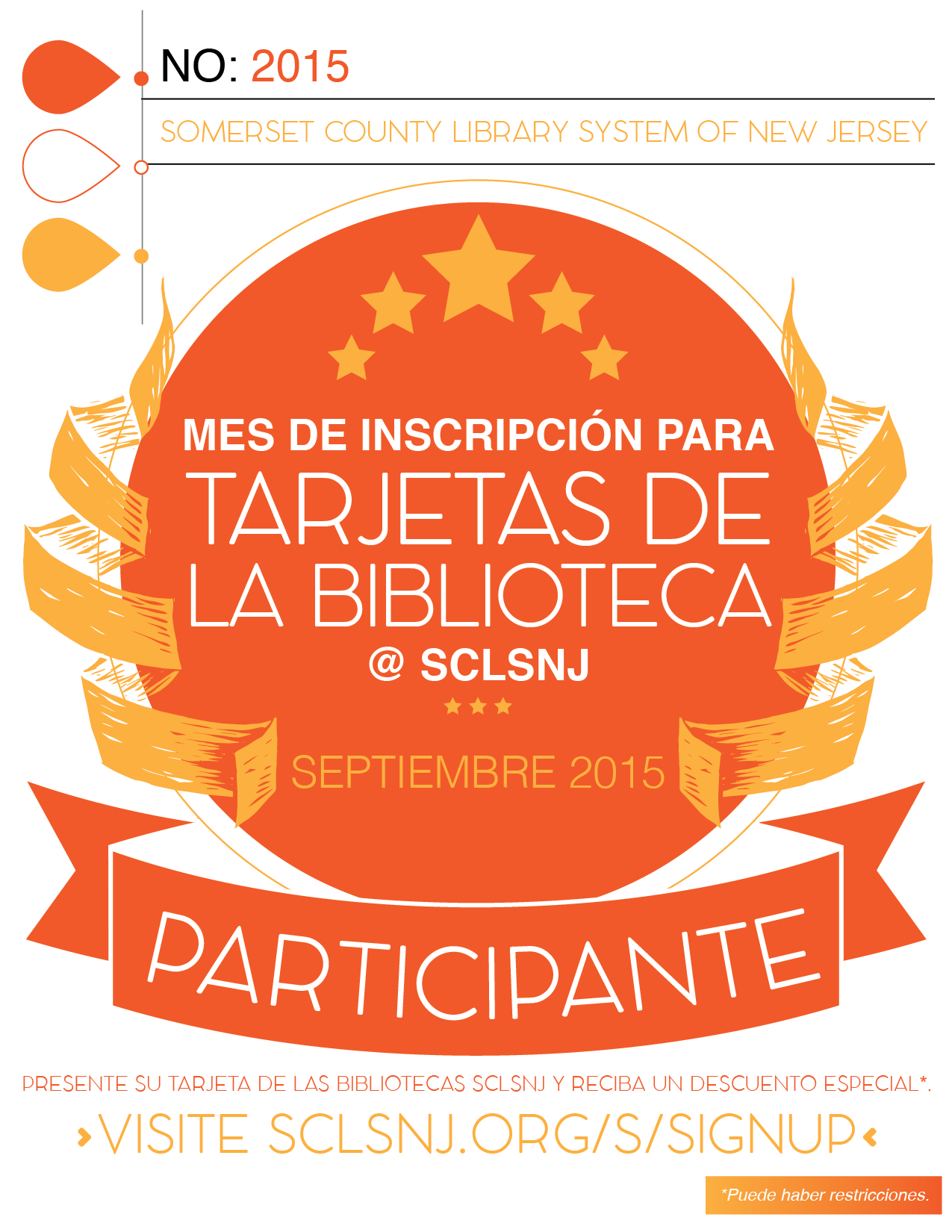 Mailers were delivered to 14,027 homes in the surrounding Watchung, Warren, North Plainfield, Greenbrook, Bridgewater, Somerville, North Branch, and Hillsborough communities. There was a 3.56% return rate (industry average is about 2%) documented for this campaign. September 2015 also saw SCLSNJ’s largest increase in new patron sign-ups since July of 2014. 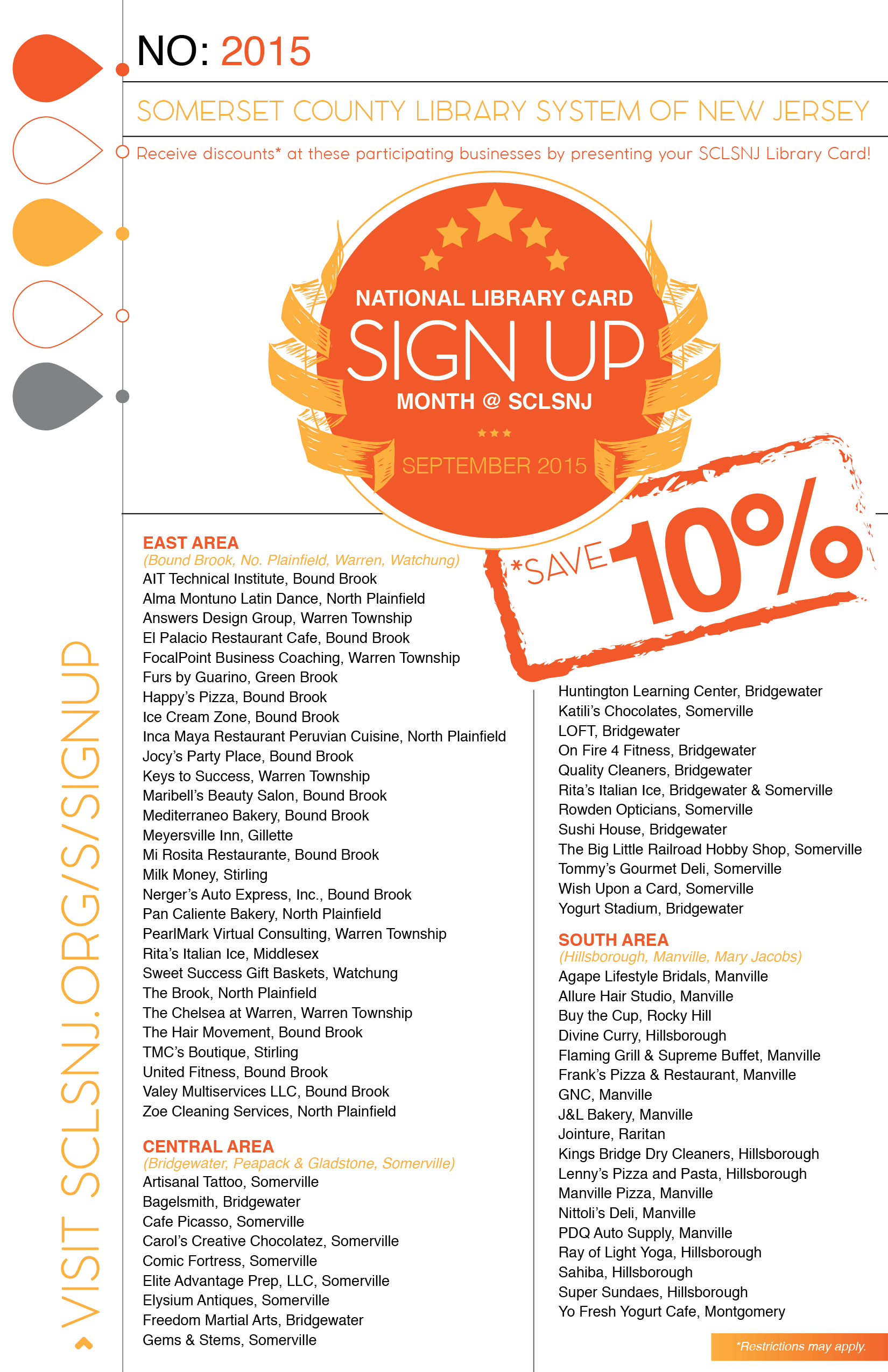 The total acquisition cost to run this campaign was $2.84 per new patron – a cost that was below SCLSNJ’s estimated goal of $3.00-$5.00 per acquisition. Additionally, two of the three winners of the tablet raffle prize were individuals new to the library–both of whom were excited to be offered a special one-on-one “learning to use your library” introductory session with an expert Librarian. Partnering with Somerset County businesses allowed the Library System a chance to support economic growth while encouraging community members to visit their local library to sign-up for a free card–a card which opens doorways to even more opportunities. Community businesses – working again in conjunction with the Library – voiced excitement to repeat this community outreach campaign once again in the 2016 calendar year.